WHO WE ARE. A HISTORY. THE FUTURE

Ave Maria Catholic Church is a thriving, growing Church within the Archdiocesan Marian Pilgrimage Centre, a place for worship, pilgrimages and private prayers.  The Archdiocesan Lenten Pilgrimage  has taken place here annually since 2002.

Ave Maria Catholic Church fosters God’s kingdom in the community by proclaiming the Word of God, celebrating the sacraments, and welcoming and serving one another.

A place where everyone can come and feel comfortable and enjoy the service in a friendly atmosphere, with sermons that are always practical, biblical and in line with the Catholic doctrine.  A church that builds families.

The first Mass of Ave Maria Catholic Church, Ikate-Elegushi was celebrated on the 10th of May 1998, by late Rev. Fr. Patrick Adegbite in the premises of Germaine Auto Centre, some 1km from the current location of the Church. About 700 people attended that Mass.

Earlier, in his evangelical mission to extend the presence of the Catholic Church in the Lekki region, Rev. Fr Adegbite had arrived Ikate-Elegushi in the company of two ladies, Mrs Henrietta Obinugu and Mrs Edozie-Ighofose, looking for a garden to celebrate Mass. It was the owner of Germaine Auto Centre, Chief Jerry Chukwueke who eventually offered the use of a hall in his factory.

Masses continued to be celebrated here, and shortly after, some land was purchased by the Archdiocese for the construction of a Church building and to build a Marian Pilgrimage Centre similar to that at Maryland. The Pilgrimage Centre was to serve the Catholic population in and around Ikoyi, Victoria Island and Lekki.  The two ideas were merged into what now exists as Ave Maria Catholic Church and Grotto on 17 plots of land on Kusenla Road, off Lekki-Epe Expressway.

By the early 2000’s the Lekki peninsula area witnessed a high rate of development. But unfortunately, Ave Maria did not grow with it for two reasons: the deteriorating condition of the roads leading to the Church and the swampy state of the Church premises. Without a sizeable number of parishioners to attain the status of a parish or quasi parish, Ave Maria remained a station Church of Ss Phillip and James Catholic Church, located some 5km away. During this period, a temporary Church was built on the premises, but was later demolished.  Rev. Fr. Adegbite continued to celebrate Mass here until his death in October 2007.

Between 2007 and 2012, the new Parish Priest of Ss Phillip & James, Very Rev. Msgr. (Prof) Francis I. Ogunmodede, was successful in mobilising Catholics in and around Ikate-Elegushi and from Ss Phillip and James, to raise funds for a clergy house. When it was completed in 2012, the clergy house fulfilled a part of the prerequisite for Ave Maria to be recommended to be raised to the status of a quasi-parish. This was done by Very Rev. Msgr. (Prof) Francis Ogunmodede. And on the 2nd of October, 2014 Rev. Fr. Simon Okelezo was assigned to Ave Maria as the first parish priest.

From this time on, Masses were celebrated every weekday and on Saturday mornings in the chapel inside the clergy house, and in the open grounds on Sundays. 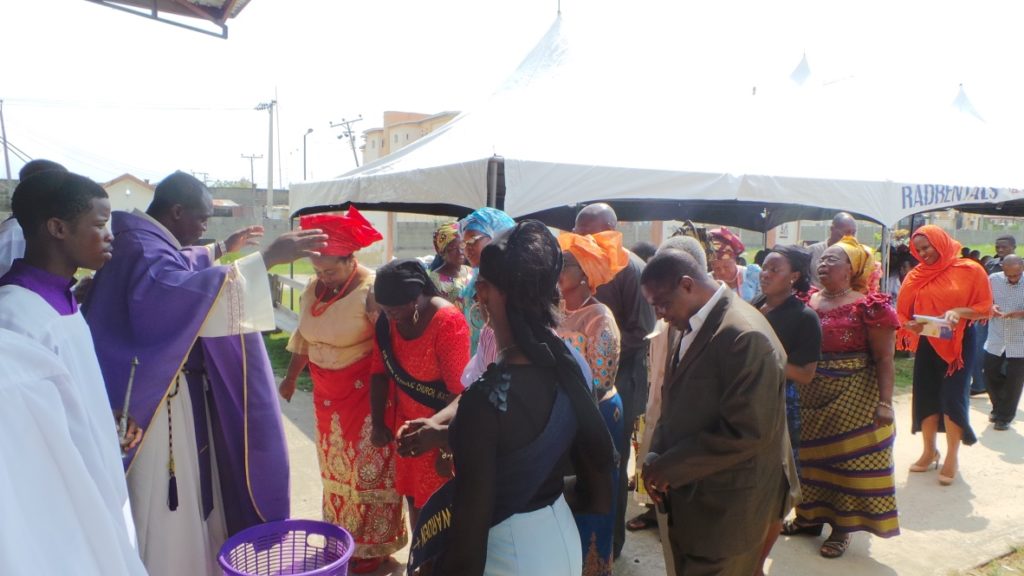 Not satisfied with the rather very small congregation (a little above 40 people), the new Parish Priest also continued to evangelise and attract Catholics living in the area to Ave Maria. Through the support of many committed parishioners and visitors, another temporary Church building was completed in October 2015. By this time also, the access roads and the Church premises had been repaired. The parish then began to grow at a fast rate, until it was necessary to have two Masses on Sundays.

In the meantime, a station Church was established for a nearby water-side community called Itodo-Gbame. About 700 people celebrated Mass here in their native dialect every Sunday.  Sadly, the church structure was demolished and the community dispersed in December 2016, when they were displaced by new building developers.

In Ave Maria, however, there were further developments as the community continued to grow and settle. The 14 wrought iron sculptures of the Stations of the Cross, preserved after the demolition of the earlier Church structures, were refurbished and erected along a new fence. Five pillars with statues on them were dedicated to Our Lady under various titles were also erected. And on the 8th of September 2017 (Feast of the Birth of the Virgin Mary), Archbishop Alfred Adewale Martins dedicated the newly constructed altar for the Marian Pilgrimage Centre and the Ave Maria Grotto. 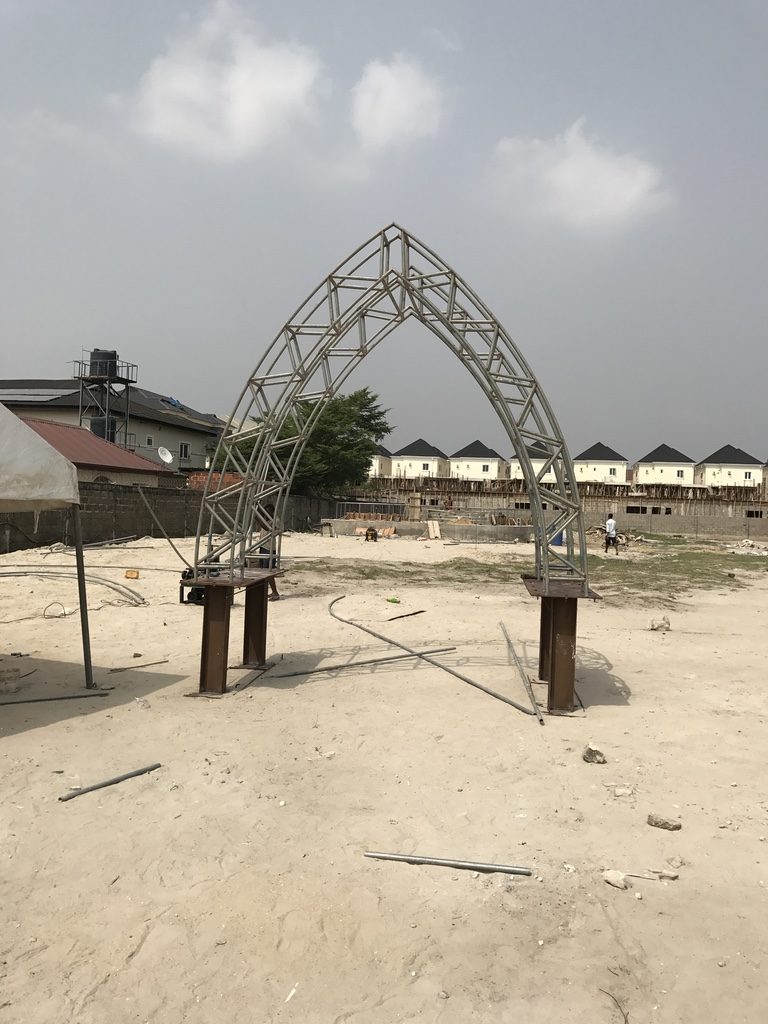 Thus, Ave Maria Catholic Church exists as a Church within the Archdiocesan Marian Pilgrimage Centre, a place for worship, pilgrimages and private prayers.  The Archdiocesan Lenten Pilgrimage has taken place here annually since 2002.

Firm plans are in place to build a permanent Church building. 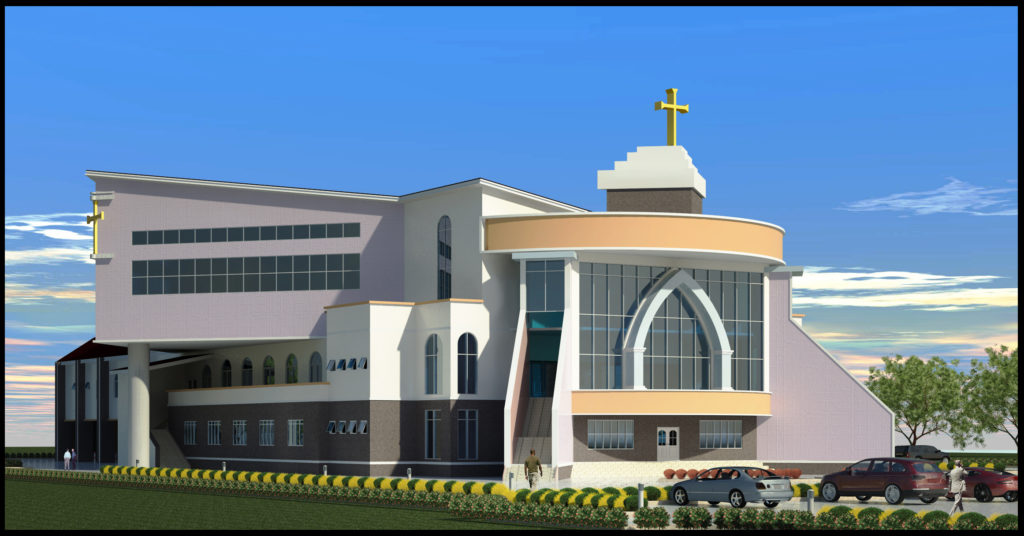