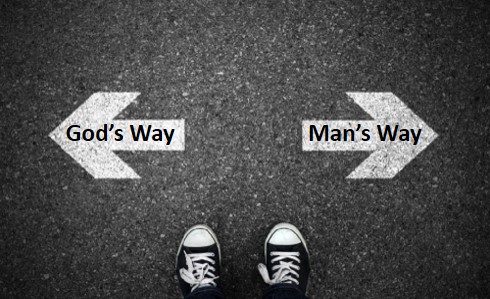 MY FUNDAMENTAL CHOICE, FOR OR AGAINST GOD

Making choices characterise  the whole of human life. We are at every point in time making decision, choosing one over another. A philosopher  once said that, “even when we decide not to make a choice, that is also choice in itself.” So, we can’t do without making choices. That you are reading this reflection today is a choice you have to make over reading other things.

So, we are always making choices in every situation. Some are small and unimportant, like choosing the cloth I will wear today. Some other decisions are serious because of what can come out of them. Decisions about what to study in school or which skill to learn, about a way of life, about a marriage partner, deciding the future or fate of others – all those decisions are important. Many of those choices we make only once in life. And, somehow, we feel that if we make the wrong choice, we will have to bear what follows, whatever it is, we will have to live the consequences of our decision.

All those choices and decisions we have to make in life are important, but there is one which is even far much more important. Because it touches, not only our life now, but even life after this life. It is the decision whether or not to follow the Lord.

This is the decision God confronts us with this Sunday. The decision to follow the Lord or not. Which are you going to take?

The First Reading taken from the book of Joshua deals with a covenant renewal ceremony that took place at Shechem some few years after the people of Israel had entered the Promised Land. It seems to Joshua that the generation of the Israelites who were born after the great events of Mount Sinai, where the covenant was first ratified by God with the people of Israel, are sort of drifting along without any commitment that is truly their own. They had no true conviction in their belief in Yahweh the God of their fathers as they were just born into the religion and were just following since it was the religion of their fathers. Now, since when they entered the Promised Land, the people of Israel found other people there, who of course, had their own gods: the Baals and Ashtarath, which were believed to provide rains and gave fertility to people and their animals. The people of Israel were beginning to pick bits and pieces of this people; they were beginning to admire their way of life, their culture and their god.

So, Joshua gathered them at Shechem and said: “Wait a minute, you are beginning to loose focus and direction; it seems as if you don’t know who you are and where you are coming from. Now, choose who is your God, to whom would you give allegiance – the God of the Exodus who brought your fathers out of the land of slavery in Egypt, sustained them during the time they wandered around the desert… Or the gods of this people that you have met in the Promised Land? Choose whom you shall serve today. But as regards my family and me, we shall serve Yahweh who brought us out of the land of exile.”

This was a moment of choice for the people of Israel, a moment of decision. They replied without hesitation: “Far be it from us to desert Yahweh and to serve other gods!” We want to serve Yahweh who has freed us and protected us throughout our wandering; there is no god as great and good as he is.” They made the decision to follow the Lord.

At baptism, we were made members of God’s new chosen people. When we came out of the baptismal water, like the people of Israel, we too solemnly professed our faith in God and made the choice to serve him and him alone. So, a solemn covenant was entered into between us and the Blessed Trinity. At our Confirmation, we renewed this covenant and promised to be loyal to Christ – even if that loyalty brought sufferings and death on us. We gladly became soldiers of Christ – never to desert God. Are we still true to that decision or not?

We also have to make daily choices for God or against him. To follow God or not. To remain loyal or to desert God. That moment of choice can come in different situations: When you are disappointed by people; when you have financial challenges and there seems to be no help; when a loved one or we are diagnosed with a serious illness; when we loose a loved one; when we have the opportunity to revenge the wrong done to us by somebody; when we are called to work for God and it clashes with the time we recreate.

Just as Joshua called on the people of Israel in the first reading to make their choice, Jesus called upon the people who had listened to his discourse on the Bread of Life to make up their minds whether or not they were going to believe in him and follow him. Surprisingly, those who had taken part in the multiplication of loaves and have listened to Jesus preached refused to follow Jesus again. The offering of his flesh as food and blood as doing was an intolerable teaching for them. They decided to stop following Jesus.

Rather than Jesus calling them back, he turned to his 12 apostles – “What choice are you going to make – Are you not going to leave too…?” Peter – “Whom shall we go, you have the message of eternal life…” Even though Jesus was sad to see those people leaving him, he let them go. It wasn’t great crowds that excited him. What mattered to him was the authenticity and sincerity of those who stayed. Their conviction that Jesus is the messiah.

The crisis here, is the crisis of the Real Presence of Jesus in the Eucharistic Bread. It was a hard teaching for the first listeners and still a hard one for some. But that remains the teaching of Jesus. If he meant otherwise, or there was a misunderstanding on the part of his listeners of what he meant, he would have called back those who left in the gospel of today and make them to understand better. They all decided to leave Jesus, not just for that day, but they stopped following him.

And many people are still leaving Jesus today. St Paul asks, “what shall separate us from the love of God?” Nothing should make us decide to leave God. Nothing should make us stop following him. Let us therefore renew our decision or choice to follow the Lord. Let us say like the Israelites; We shall follow the Lord always. Let us also say like Peter, ‘Lord whom shall we go to, you have the message of eternal life.’ Let us not only say these, but, live what we say. And may God bless you.

IS JESUS OUT OF HIS MIND?

An error has occoured...